Behind the Candelabra (2013) / My Life with Liberace 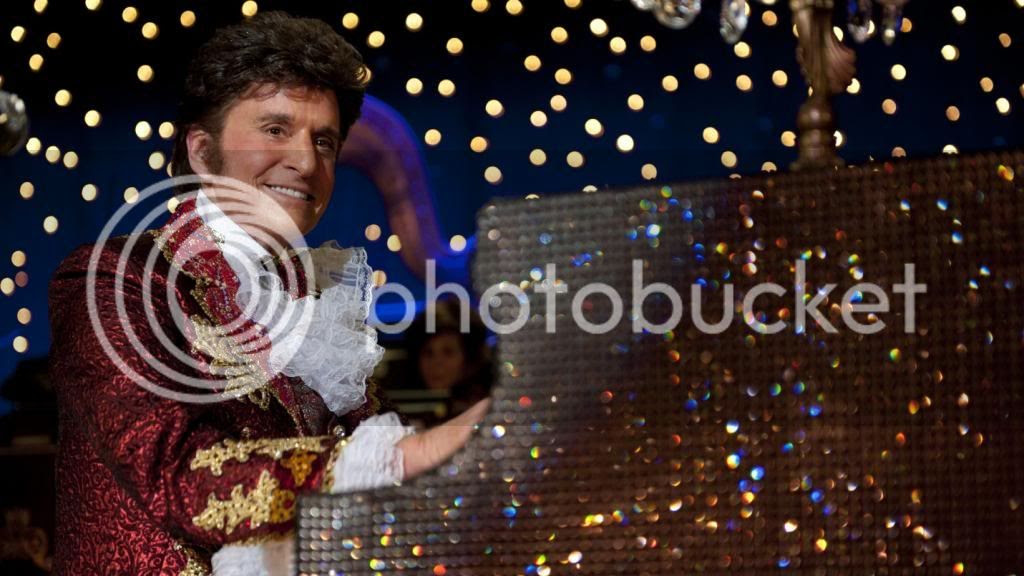 "Too much of a good thing is wonderful."

The 1970's was a better time, wasn't it; you could dress up in glitter, frill, fur and eyeliner from head to toe, but people wouldn't automatically assume that you're gay. I guess the stereotype came to be much later. The clothing was one of the best things about the movie. Some of that stuff was just outrageous, and I mean that in a good way.

Before today I didn't know anything about Liberace. All I knew was that they like to make a lot of Liberace jokes on Glee, so I assumed it had to do with something, um, eccentric. I hadn't heard about the movie either, which is kind of cool, because it hints that A-listers in gay roles is not such a big deal anymore. So I read a couple of reviews, and then decided it could be worth seeing. And it really was worth seeing, because it's nominated for like a million Emmys, and I never really had an opinion about Michael Douglas before, but now I do, and the opinion is that he's so good.

The acting is no doubt what makes the film stand out. Douglas especially, but Matt Damon, too. He portrayed a character much younger than himself, and you need more than a tremendously convincing make-up to pull that off. The make-up was kick-ass, of course, but still. They were both so shameless, and they owned the characters, even when they did the boldest scenes, put on the most embarrassing costumes and let themselves look the most unflattering. There was not even a trace of the well-known Hollywood superstars, so there's no reason to feel awkward. Bravo! And Rob Lowe with that highly attractive facelift... Scene-stealer.

(I can't get over Cheyenne Jackson, aka the most hilarious guest star on Glee ever, being a part of the film. I just didn't expect to ever see Dustin Goolsby in a glitter tuxedo. "I'm handsome, I'm good-looking and I'm easy on the eyes. Also I'm gorgeous." Hahahahhaah... Classic pick-up line. And Daddy Hummel aka the brilliant Mike O'Malley had a small role, too! Glee invasion! By the way, keep the jokes coming, because from now on I will get them.)

I'm tired so that's all I'll say. I hope many people will see the film, and I hope Douglas and Damon will get all kinds of awards. This was a very refreshing movie, I hadn't seen anything like it in a while. A bit sweet and a bit sad and a bit funny and more than a bit outrageously and wonderfully eccentric. I'm glad this made it to cinemas in Europe, even though in the US it was only released on TV. 'Cause it's too gay. Right? Welcome to the year 2013...

P.S. I know this has to do with absolutely nothing, expect for Matt Damon's BFF, but I feel so sorry for poor Ben Affleck, because people think he'll be a terrible Batman. C'mon, just because the guy has never acted well in anything, doesn't mean he can't pull off Batman! I mean, I could pull off Batman. Just growl and speak in a ridiculously low voice and frown a lot. I bet Benny will be the best Batman ever! Not that I will see the movie, because I think Batman is stupid and Superman is lame.
Posted by Eeva klo 22:48


Welcome to my film diary!

I write mostly about films (ones I've just seen and ones I've seen once again), from a highly subjective point of view and, seriously, not very seriously. I write posts, not reviews.

I obsess, I ramble, I praise. When it comes to films that I love, I don't know what critical thinking means.

Enjoy, if you can!